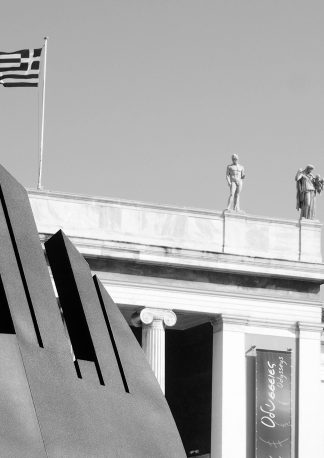 Venia Dimitrakopoulou works with a wide variety of materials: stone, marble, metal, paper, the digital image, sound and speech. This helps her penetrate into more aspects of artistic creation. Influenced by her studies in theater and music, she tries to connect sculpture, music and happenings, and narrative and theoretical discourse into a single ensemble that addresses emotions and the mind equally. “What interests me most is the space between pairs of opposites. From the hard, rough, aged stone, to the delicate, ephemeral, thin paper. From the very small to the very large scale. From matter to non- matter, and so on. This intermediate space, the point where opposites come together, where all probabilities meet. I suspect that somewhere there lies the understanding of the world, and that challenges me to keep on searching in that direction.” 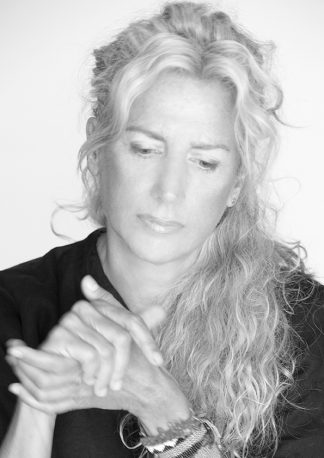 Venia Dimitrakopoulou was born in Athens, Greece. She learnt sculpture at the Athens School of Fine Arts while studying theatre at the Athens Conservatoire Drama School. She has also attended drawing classes at the Atelier Vivant of the École Nationale Supérieure des Beaux-Arts (ENSBA). She lives and works in Athens and on the island of Aegina. She is a member of the Chamber of Fine Arts of Greece (EETE) and the Sculptors Association of Greece.

In 2014, Venia Dimitrakopoulou Promahones, was published by Hatje Cantz, a
publication that focuses on her large-scale sculpture “Promahones”. This sculptural installation was first presented at the Benaki Museum at, Pireos st. Annexe during the winter of 2014-2015. Since 2016, the sculptural installation has been installed in the garden of the National Archaeological Museum of Athens.

In recent years, she has been active in Italy with solo exhibitions and participating in
well-known art events.

She participates in the working group, “Tempo Forte”, a cultural initiative of the
ambassador of Italy in Greece that promotes cultural dialogue and the establishment at an intergovernmental level of common aspects of the identity of the two countries.

From November 2018 till June 2019 Venia Dimitrakopoulou presented a series of personal exhibitions “Matter – Logos – Sound” under the general title “Primordial Future” in Palermo, Turin and Trieste. Upon this occasion, a catalogue by Umberto Allemandi has been published. This trilogy was also presented at the Gallery of the Cyclades in Syros.

In 2016, one of her drawings was selected to become the cover of the revised publication of Mario Vitti’s History of Modern Greek Literature (Cafoscarina publications, Venice).

Ιn January 2017, the president of the Italian Republic, Sergio Mattarella made her a Cavaliere of the Ordine al Merito della Repubblica Italiana, “in recognition of her contribution, through her artistic work, to creating bonds with Italy, a country with which she feels deeply connected”.

In 2018 her work “Golden Spear” was placed in the permanent collection of the Antonino Salinas Archaeological Museum in Palermo.

WORKS AND STUDIES FOR PUBLIC SPACES