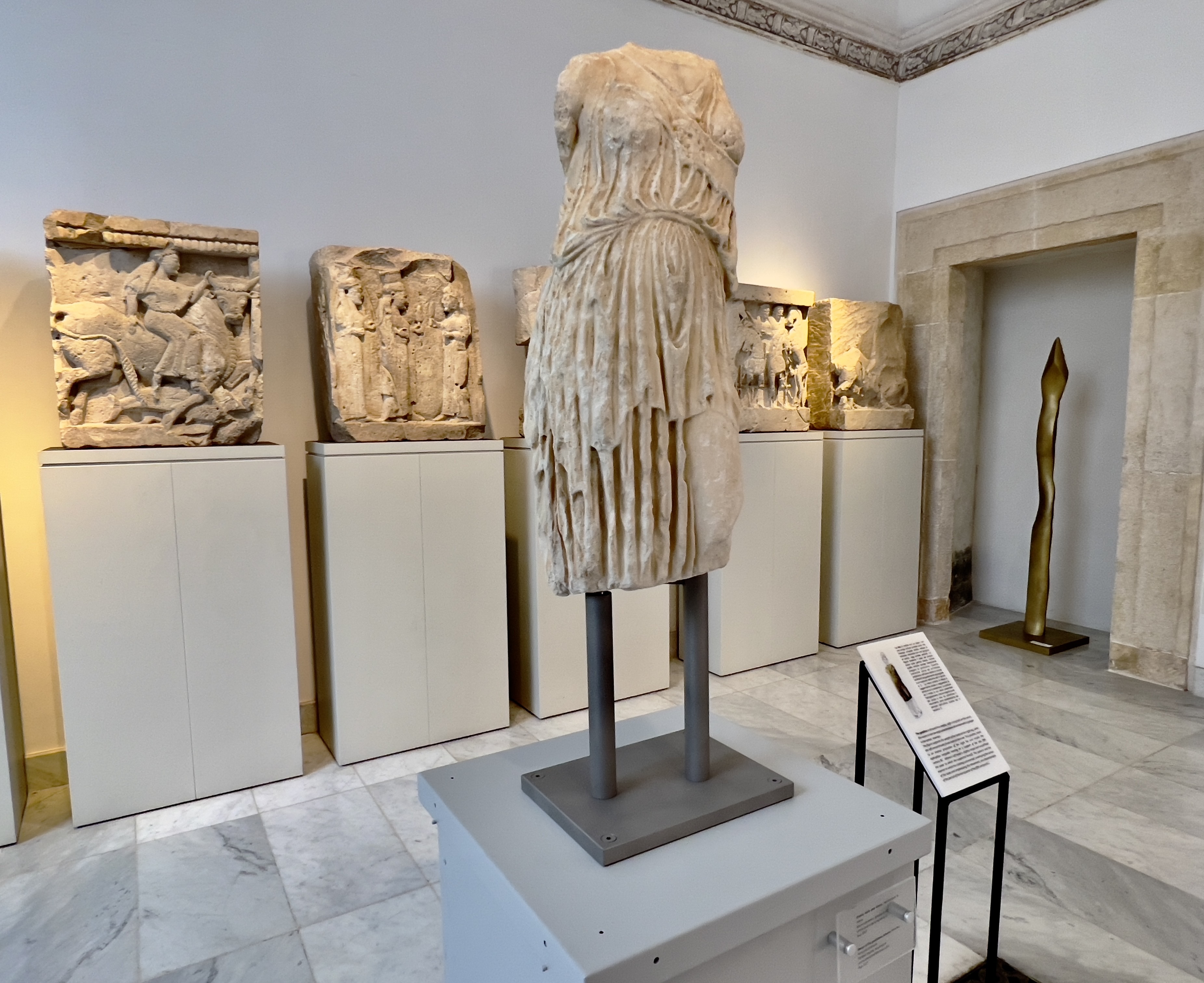 in proximity to the “Golden Spear”

The statue of goddess Athena (420-400 BC), from the Acropolis Museum collections, is on display since 9 February 2022 in the emblematic archaic sculptures gallery of the Archaeological Museum Antonino Salinas in Palermo, as a long-term loan for four years. In this formidable statue Athena is depicted bending her body as she leans on her –lost today- spear that she would have held in her left hand.

In the same room stands the “Golden Spear” by Venia Dimitrakopoulou, which is part of the museum’s permanent collection since 2019, since it remained there after the end of the exhibition “Primordial Future” organised in the museum by the Foundation for Hellenic Culture of Italy.

A retrospective of Venia Dimitrakopoulou’s work at the cultural broadcast “Logo Technis” of the Hellenic Parliament TV: A conversation with the artist on the contrasts that define her practice: the material and the immaterial, the private and the public, the conscious and the unconscious. 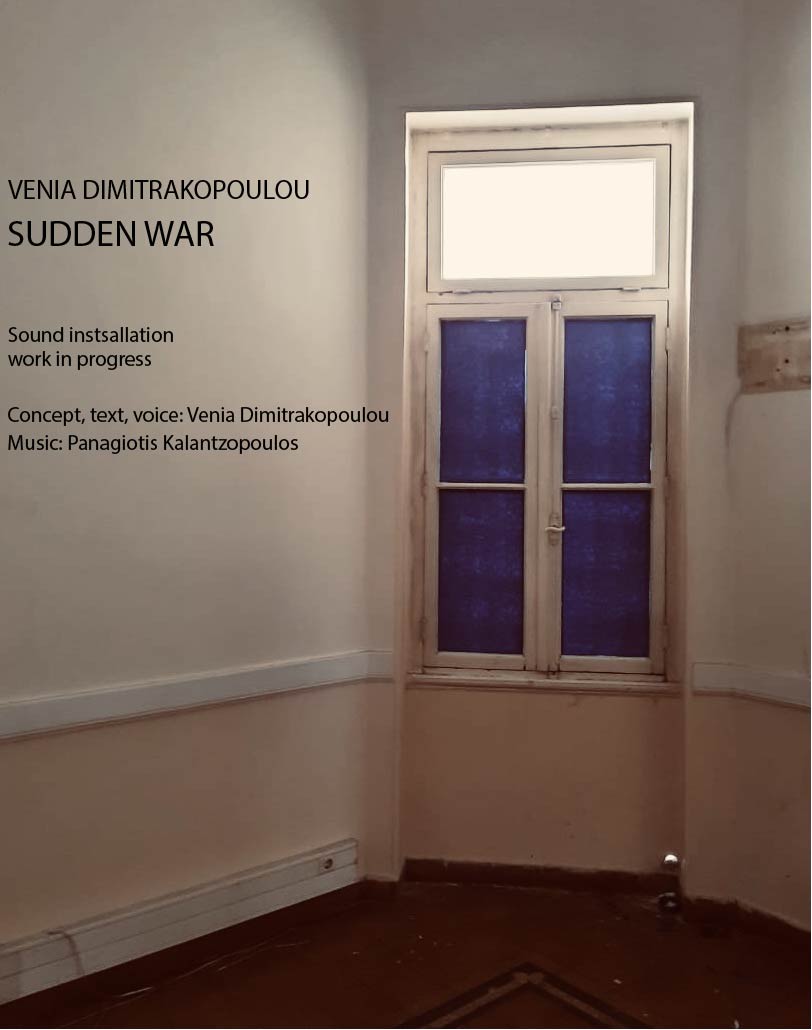 As part of the course “Dialectics of the Image”, Venia Dimitrakopoulou will present her new series of works titled “Sudden War”  in an interactive lecture 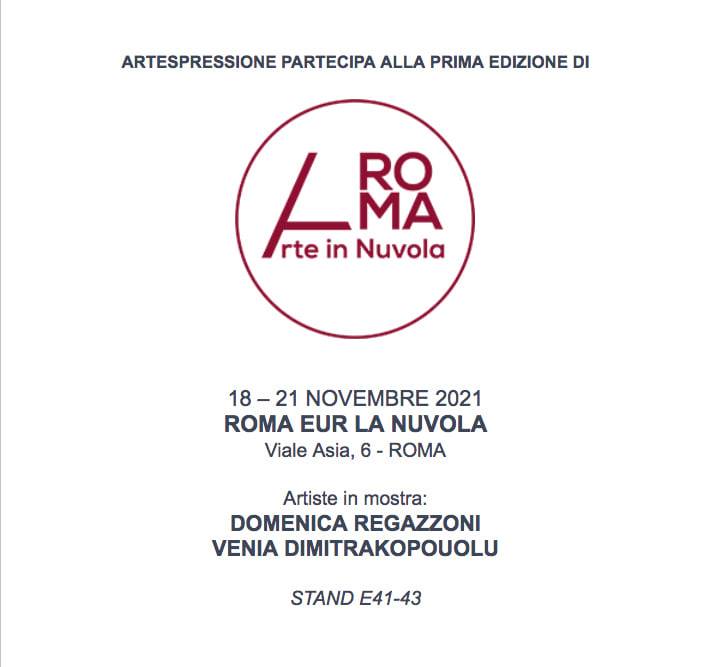 participation of Artespressione Gallery at ROMA ARTE IN NUVOLA 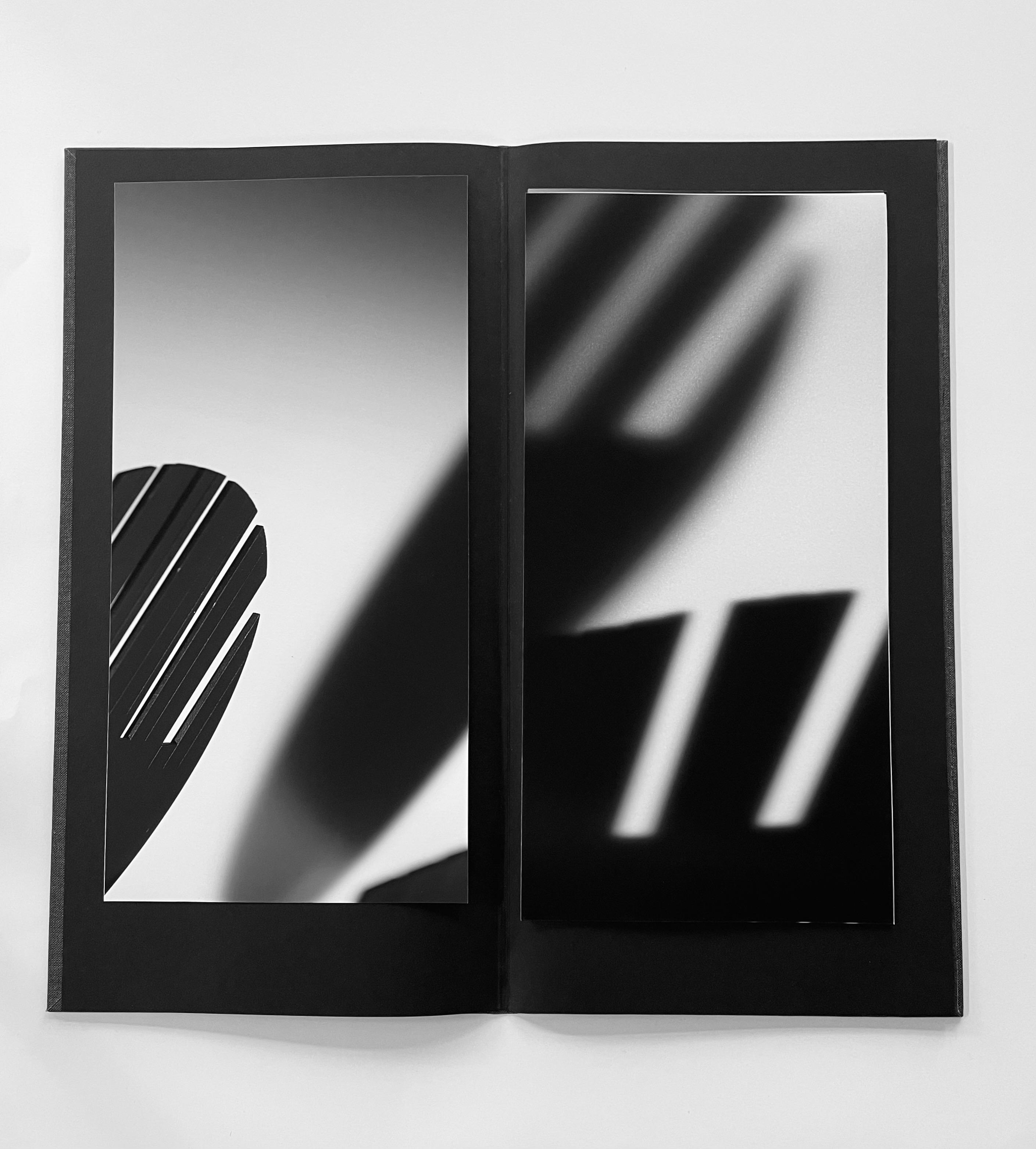 “Quieter than Silence_ The Space Between”

Nov 14-Dec 16, 2021 (private residence location: New York CIty, lower Manhattan)
(exact address will be given by rsvp/book by apt via email thru the Initiatives invitation)

”We find beauty not in the thing itself but in the patterns of shadows, the light and the darkness, that one thing against another creates… Were it not for shadows, there would be no beauty.

At the heart of this philosophy is a fundamental cultural polarity. Unlike the Western conception of beauty — a stylized fantasy constructed by airbrushing reality into a narrow and illusory ideal of perfection — the zenith of Japanese aesthetics is deeply rooted in the glorious imperfection of the present moment and its relationship to the realities of the past.”

The quality that we call beauty … must always grow from the realities of life, and our ancestors, forced to live in dark rooms, presently came to discover beauty in shadows, ultimately to guide shadows toward beauty’s ends.

Since Plato’s Allegory of the Cave, we’ve seen shadows as a metaphor for the illusory and wicked aspects of life, for that which we must eradicate in order to illuminate the truth and inherent goodness of existence. And yet we forget that the darkness they cast evidences the light — palpable proof without which we might not appreciate or even notice the radiance itself. 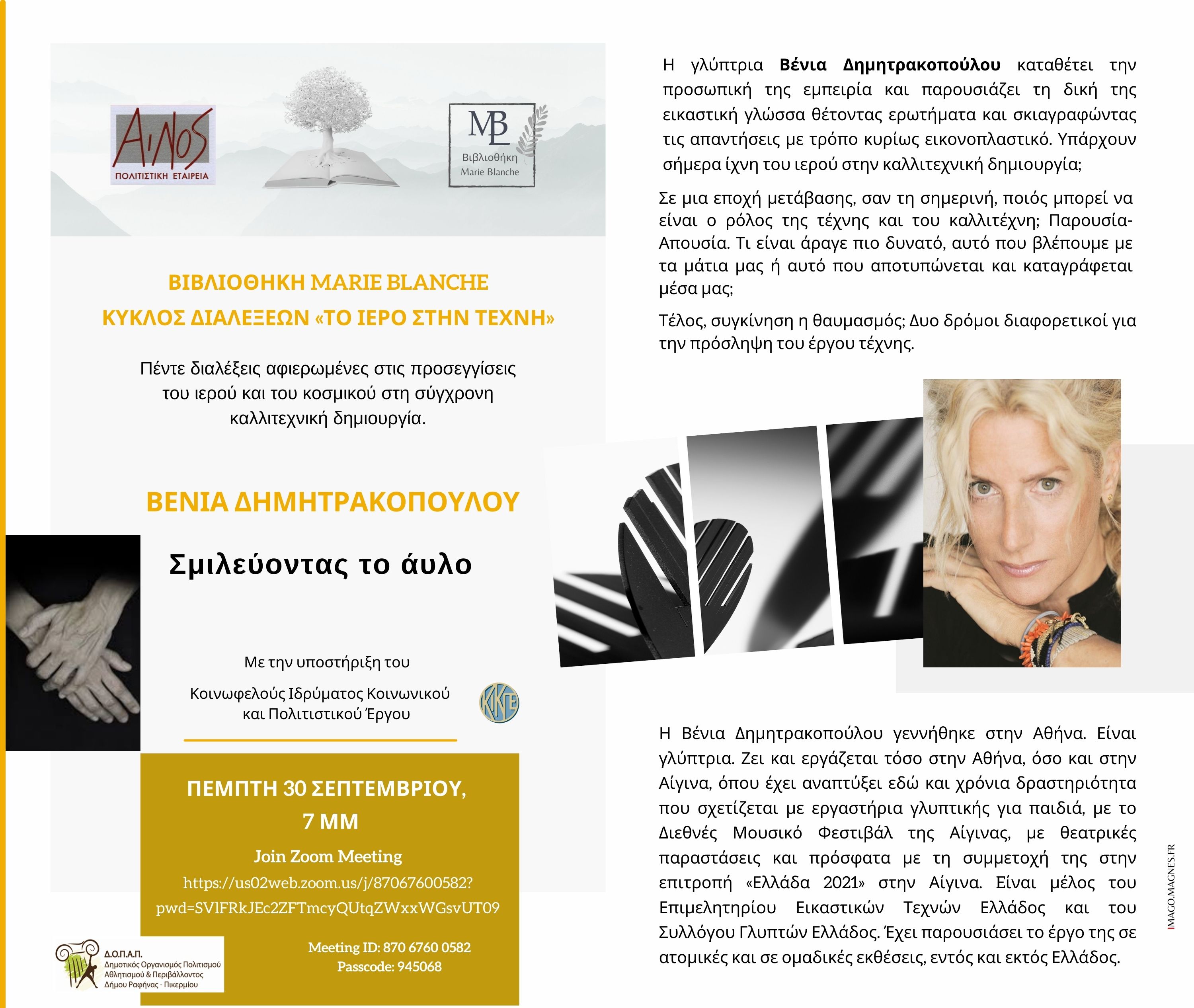 The artist Venia Dimitrakopoulou presents her work in the context of the five online lectures on “The Sacred in Art”organized by the Marie Blanche Library and the AINOS Cultural Association. Title of the presentation “Sculpting the intangible”.

Venia Dimitrakopoulou shares her personal experience and presents her own visual language by asking questions andsketching answers in a predominantly iconographic way. Are there any traces of the sacred in artistic creation today?

In an age of transition, like today, what can be the role of art and the artist? Presence-Absence. What is more powerful, the thing we see with our eyes or the thing that is captured and recorded within us? Finally, emotion or admiration? Two different ways to capture the work of art.

With the support of the Public Benefit Foundation for Social and Cultural Work (ΚΙΚPΕ) and the cooperation of the CulturalOrganization of the Municipality of Rafina (DOPAP). 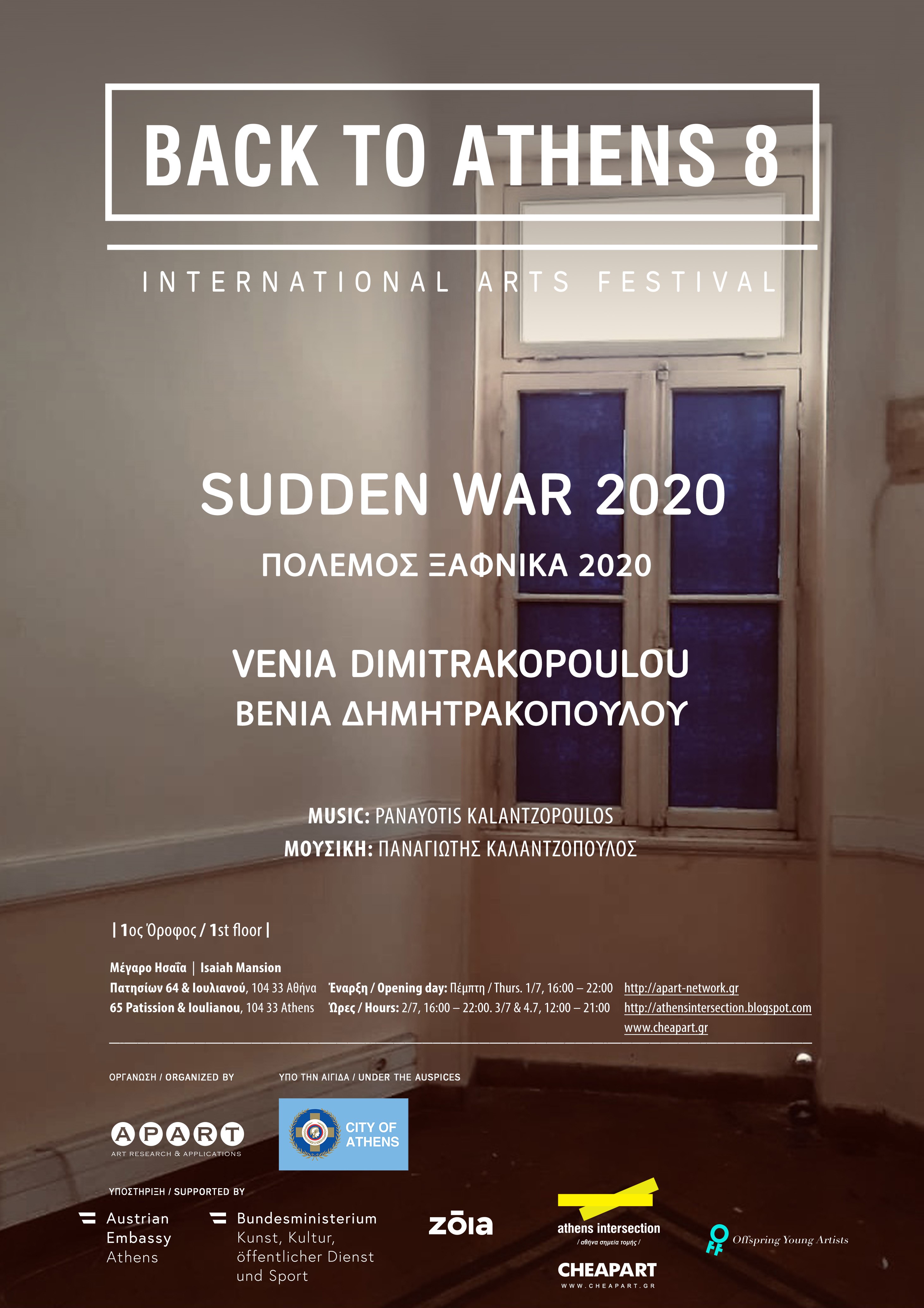 During the first lockdown I wanted to do something with everything that emerged unexpectedly, often violently and in unprecedented intensity. The need to resist this compulsory lockdown, along with the need of communication gave me the impulse. I worked with what I had in my hands. A piece of paper, a pencil, a mobile phone to record the things I wrote. I asked my friend and composer Panagiotis Kalantzopoulos to try something. I sent him a recorded text of mine and asked him to dress it with music. When I heard the result, I was surprised.

It seemed like at that time, despite the distance, two different worlds came together and shook hands. It was a warm handshake, at a time when touch was absent. Other texts followed, which led to the creation of Sudden War. An audio project consisting of 12 + 1 autonomous tracks that can be heard either all together or, like here in Back to Athens 8, in excerpts.

It is a work that talks about an unexpected meeting, about a stranger, about a strong connection and a war that suddenly turned everything upside down.

Everything is inside us. Light and darkness. Strength and weakness. Courage and fear. Hope and despair.

How long do they keep us captured?

Coming to the end of the age of handshake and touch, we invent ways of the same intensity and substance, in order to feel, to understand, to touch each other. One way that comes naturally to me is to try for the first time to accompany poetry and speech with music. In poetry the sequence of the words creates a vibration. When music is added, this vibration is intensified and multiplied.

It changes the nude poem into a new work. 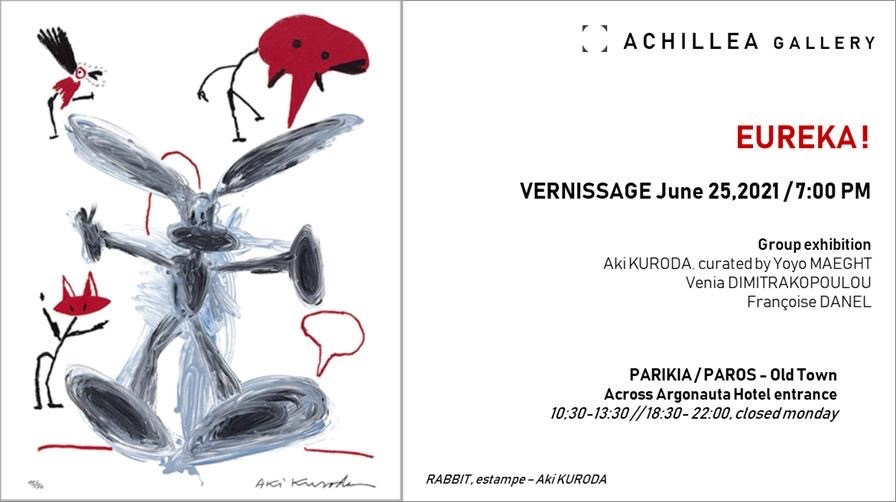 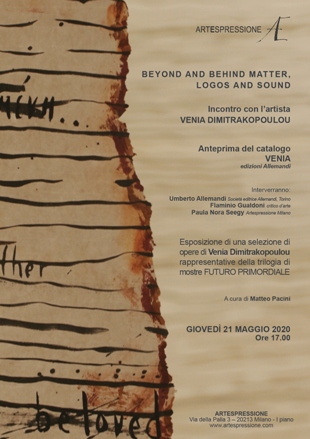 The scheduled presentation of the catalogue by Allemandi editions for the exhibition trilogy “Futuro Primordiale” and the pertinent exhibition in Milan have been postponed.

The presentation has for now been rescheduled for May 21st. 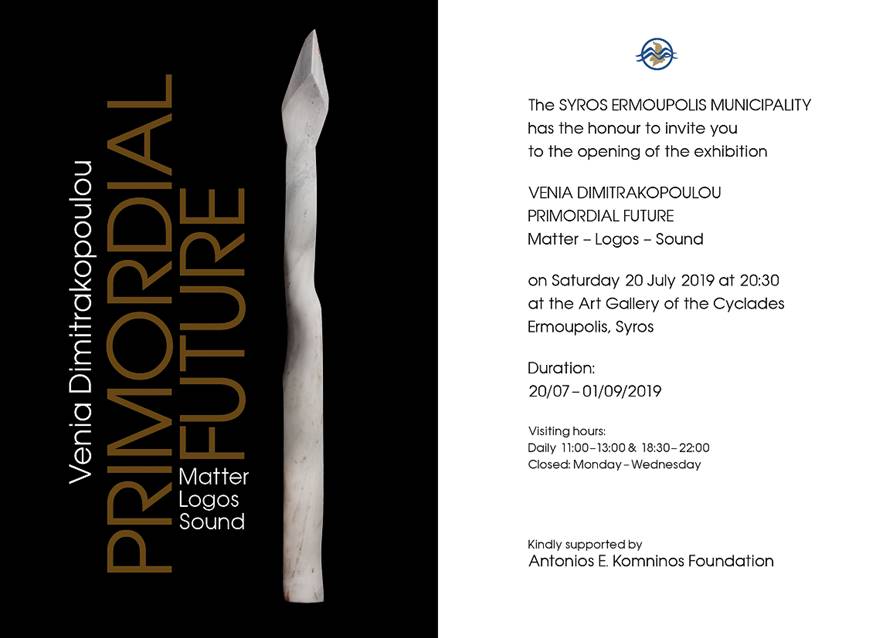